Orsini and colleagues carried out a study in which

adult male Long-Evans rats were trained to self-administer cocaine intravenously for 6-hour daily sessions over 14 consecutive days. Two additional groups serving as controls underwent sucrose self-administration or exposure to the test chambers alone. Functional magnetic resonance imaging was conducted before self-administration and after 1 and 14 days of abstinence (1d and 14d Abs). At 1d Abs from cocaine, there was increased clustering coefficient in brain areas involved in reward seeking, learning, memory, and autonomic and affective processing, including amygdala, hypothalamus, striatum, hippocampus and thalamus. Similar changes in clustering coefficient after 1d Abs from sucrose were evident in predominantly thalamic brain regions. Notably, there were no changes in strength of functional connectivity at 1d or 14d after either cocaine or sucrose self-administration. The results suggest that cocaine and sucrose can change the arrangement of functional connectivity of brain regions involved in cognition and emotion, but that these changes dissipate across the early stages of abstinence. The study also emphasizes the importance of including baseline measures in longitudinal functional neuroimaging designs seeking to assess functional connectivity in the context of substance use 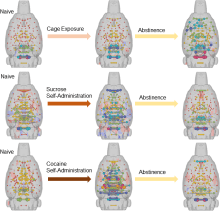